Find Your Greater Purpose and Change the World 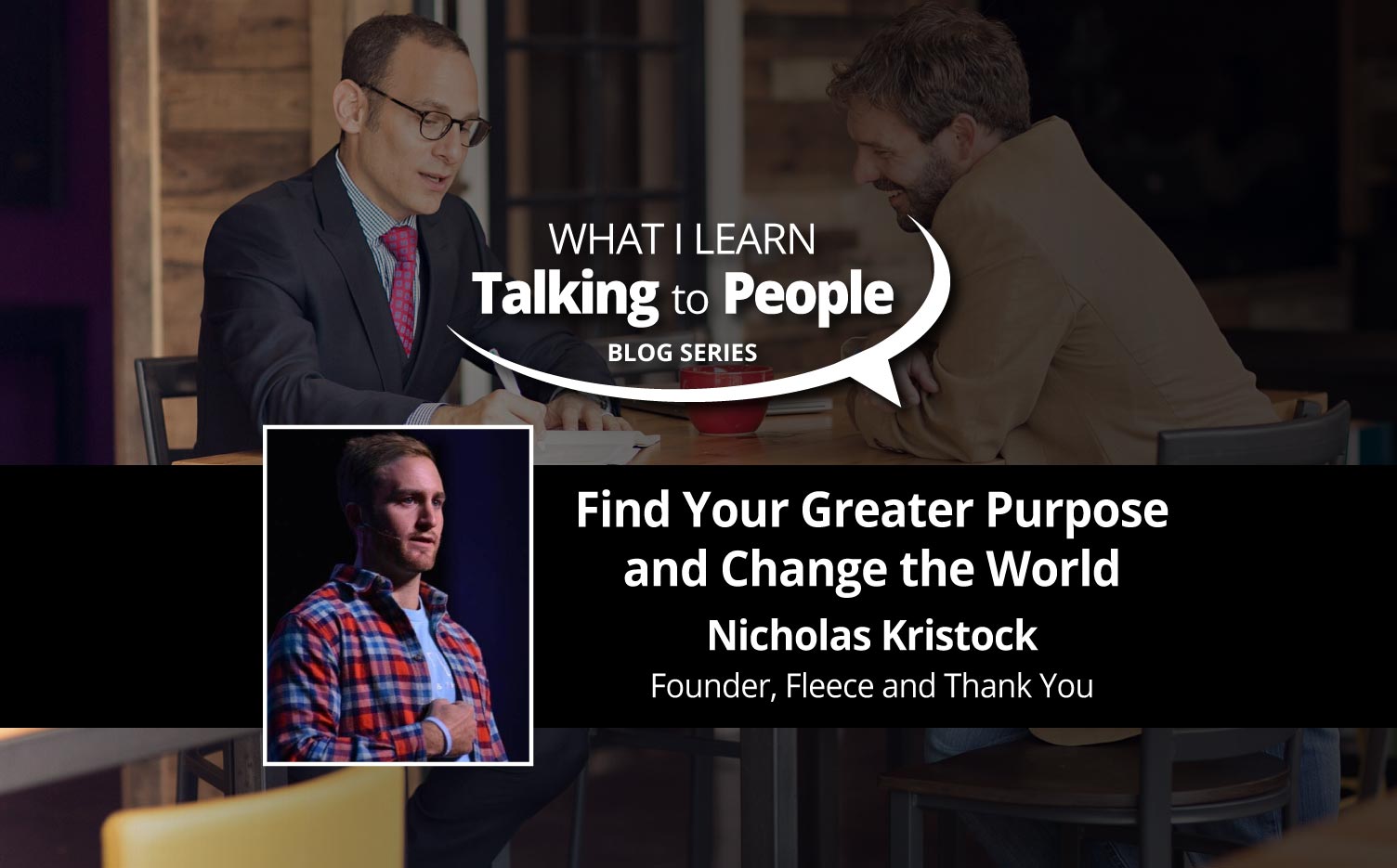 When we sit and focus on thinking like a CEO, often times the first thing we envision is the bottom or top lines of our companies. Maybe for some, focus on the bottom line of our company has tainted our vision of why we got into the business we are in. Have you ever sat at your desk, when things were good or bad, and wanted more? Have we become so numbers driven that it has paralyzed us from allowing ourselves to truly see ourselves as world changers?

Thinking like a CEO requires that we move beyond these thoughts and get in touch with our true selves, our souls, and move forward. As business leaders and CEO-minded people we are in a position to truly make a wonderful impact on the world, monetarily for sure, but socially as well. What’s stopping us?

Meet Nicholas Kristock, the founder of Fleece and Thank You, a twenty-seven year-old non-profit entrepreneur who is making such an impact. He and his company, only a three-year-old company, make blankets and messages for pediatric patients all over Michigan. Their mission is to help fight the isolation that usually comes when a child faces the throes of a hospital stay. And they are making an impact.

Nicholas and his company have found a greater purpose and have met a need. After receiving a call from his sister who works at Mott Children’s Hospital in Ann Arbor, Michigan, Nicholas realized that there were kids in hospitals who didn’t have enough fleece blankets. To take that a step farther, he also came to realize that some of these patients have people who will share their journey—for a little while, but, eventually, those calls and texts stop coming in and isolation begins to reign. There is no worse feeling than sleeping in a bed that isn’t yours, with constant interruptions by hospital attendants, and feeling like you’re all alone.

Nicholas and Fleece and Thank You have begun to minimize those feelings. He states it this way, “…to hear a 10 year old child think that they don’t have anything but the world of support behind them for their treatment journey was heartbreaking. So not only did I want to provide a service that gave every kid a blanket, but even bigger, what if we could give each of those kids a friend, and just for that moment and time, it was a friend who they knew nothing about but cared about their journey.”

In these moments, the bottom line doesn’t matter.

Have you as a CEO-minded person ever thought along these lines: what can I be doing to make a greater impact? Maybe you’ve even wrestled with the idea of leaving Corporate America to do something more meaningful? What’s stopping you? Imagine the world we could create if we all, as people who think like CEOs, sought a greater purpose.

If you’ve ever toyed with these ideas, today is the day to start making that impact. It doesn’t have to be 33,000 fleece blankets for pediatric patients across Michigan, but it could be serving soup to the homeless or volunteering at a pet shelter.

In summary, Nicholas Kristock inspires us all to think like CEOs by:

Getting into the trenches and “living the problem” you’re looking to solve, as Nicholas would say, is the place to begin. From there you build. From there you begin to see a great impact being made that can’t be measured in dollars and cents.

To hear more of my interview with Nicholas Kristock, listen here.

Listen to Jon’s interview with Nicholas Kristock, Founder of Fleece and Thank You 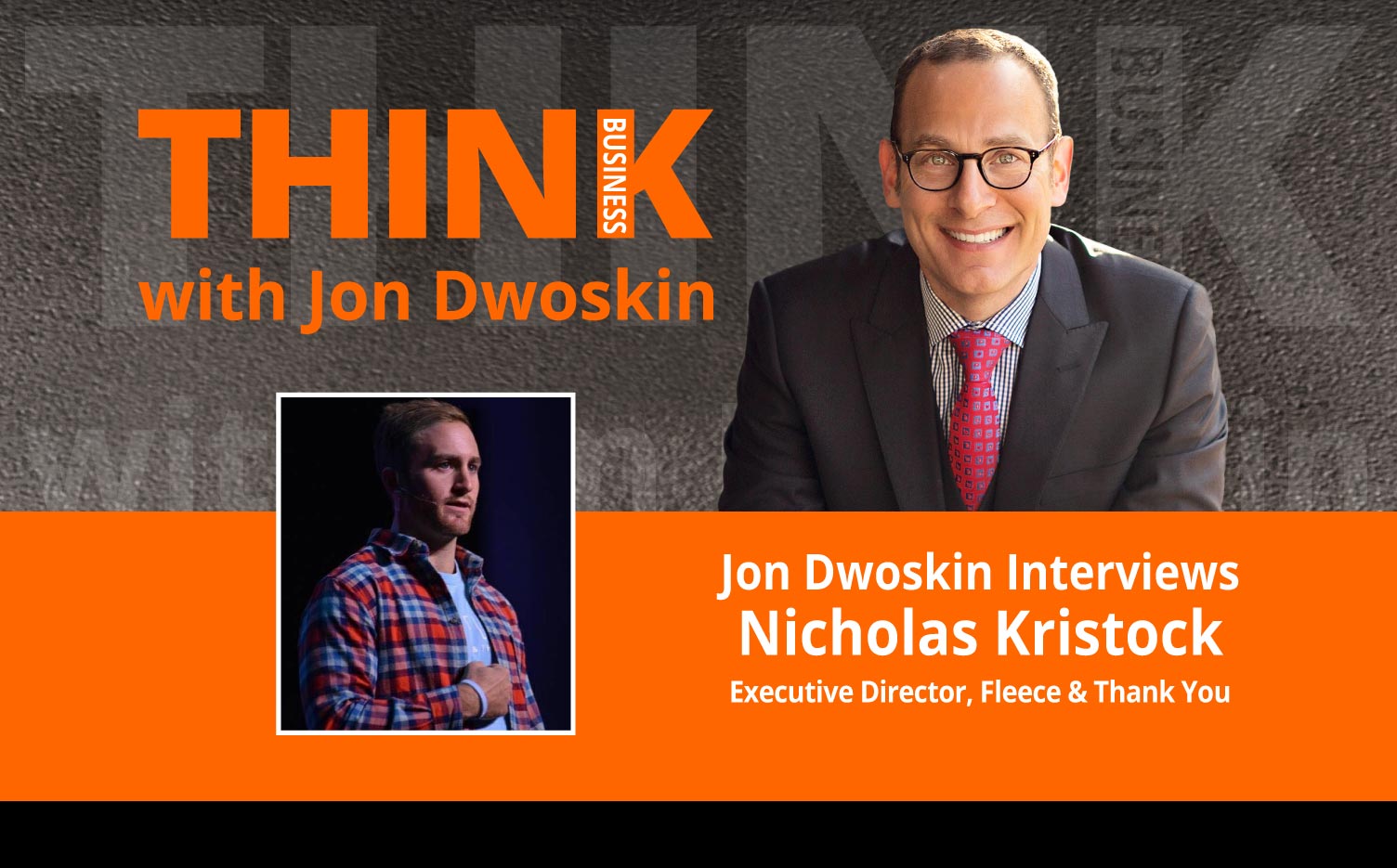 THINK Big 2-Minute Blog: Why It’s So Hard To Change And Why You Have To