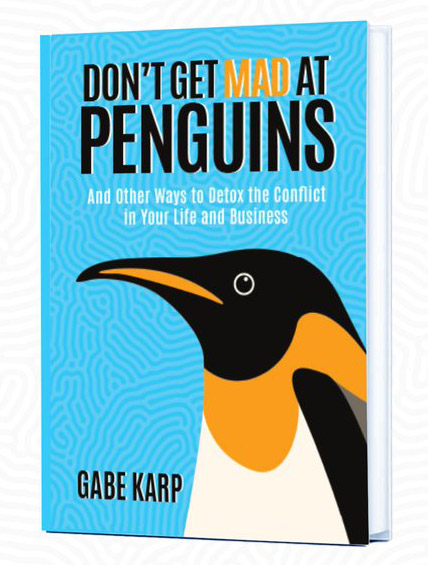 Jon talks about defining conflict with Gabe Karp, Author of Don’t Get Mad At Penguins: And Other Ways to Detox the Conflict in Your Life and Business. They discuss the meaning of Gabe’s book title and how you can use the tools in the book to shift your thinking about how to manage conflict in your business and personal life.

Gabe is a Partner at Detroit Venture Partners, a Detroit-based venture capital firm that backs early-stage technology companies. He serves on several boards of companies in the DVP portfolio. He is also a board member and Chief Development Officer for Marxent, the leader in Augmented Reality, Virtual Reality and 3D solutions for the home furnishings, building products and homebuilding industries.

Prior to joining DVP, Gabe was the Executive Vice President and General Counsel of ePrize, Inc. (now HelloWorld, Inc.), an interactive promotions company representing 75 of the top 100 brands in the world. Gabe was instrumental in growing the company from a small start up to one of the world’s premier companies in its space, during which time he built and led various operations teams. He led the efforts on multiple acquisitions, venture financings, credit facilities, and ultimately the sale of the company to a large private equity firm.

Crain’s Business named Gabe as General Counsel of the year for the state of Michigan in 2011 (privately held companies valued under $1B). Gabe’s excellence in the legal field was demonstrated by his unprecedented record of personally overseeing the legal clearance of more than 13,000 interactive promotions in 44 countries for many of the largest brands in the world with zero legal challenges. He co-authored Puerto Rico’s revised sweepstakes regulations adopted in 2009, has consulted the Federal Trade Commission as well as legislators and regulators in many states on drafting and enforcing legislation in those jurisdictions applicable to the interactive promotion industry.

Gabe spent the first decade of his professional life as a litigator (trial lawyer). He was a partner and shareholder of Hurwitz, Karp, Wallach & Gantz, P.C. His practice included complex commercial litigation, class-action litigation and legal malpractice (suing other lawyers for screwing up)—talk about conflict!

Gabe and his wife Rachel have 3 wonderful daughters. He describes what it’s like at home, “we try to take ourselves seriously every now and then, but that usually just ends in laughter.” Gabe is also an avid heli-skier (yep, that’s skiing with a helicopter).