Season 4 – Episode 4 – Be Yourself, Everyone Else Is Taken 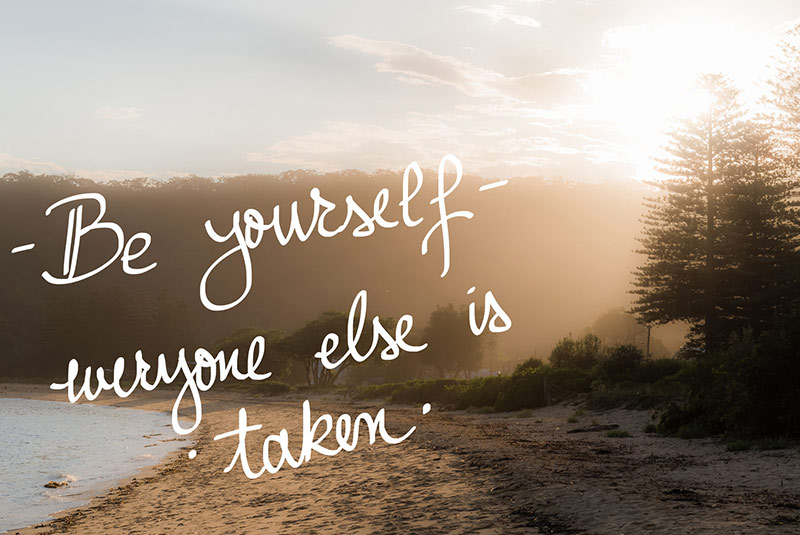 This week, the fellas tell you why you need to stop trying to be someone you are not.

Your customers know when you are not genuine, so why do it?

Be Yourself, Everyone Else Is Taken

Scott: And this is The Seven Minute Sales Minute.

Jon: Scott, how are you?

Jon: Why so great?

Scott: Got my radio voice on.

Jon: You’ve got a thing for radio.

Scott: Yes. Jon, I wanted to start off that way because there’s a reason. What are we talking about today?

Jon: Today we’re going to talk about just how to be yourself.

Scott: Not trying to be like Howard Stern or jock talk central over here.

Jon: Alright. Tell everybody a little bit more detail about what we’re going to dive into.

Scott: What we’re talking about today, folks, is really something very simple: just blatantly being yourself. If you watch a lot of movies where they have salesmen and things like that, like Boiler Room … Tommy Boy’s a good one, and like Wall Street, that sort of thing, the Wolf of Wall Street, now they make sales really cool. It’s really sexy and you can really be funny and snarky with your clients and customers, but that’s really not how business works all the time. And if you do that, you probably are going to alienate a lot of people.

Jon: Right. And I think a lot of times, especially, It doesn’t matter. We’ll talk about new salespeople, but sometimes it’s hard to figure out how to be yourself because you’re learning so much. You’re parroting your senior people that you’re mentoring, and it takes time. Maybe, for starters, let’s talk about the new salesperson.

Jon: How much time does it really take and what are the steps you got to do to really cultivate and be yourself?

Scott: I’ll tell you, I think in the beginning you really are just mirroring what you hear, and that’s okay. We talked about it before. Great artists steal. Use what people around you are using and what works, but you do have to make it your own, and you have to create your own persona here. I’d say, I don’t know. You and I talked about it. What do we kind of say, maybe a year to really come into your own?

Jon: Yeah, I would say at minimum a year and I think if you do the following things, then you can do it faster. If you don’t, I think that year can turn into maybe even two years. I think some of the things you have to do are really step back and number one, we’re going to talk about some really fundamental things. Always have a notebook and always write everything down. I encourage all salespeople to always have a notebook and a journal where, not only are they writing down what their client is saying what they need, but the people around them, the questions that their senior people are asking, the questions that the clients are asking. Write those down and if you don’t know the answers, then go get them and spend time role playing those questions and answers so you can get more comfortable at the next meeting.

Scott: Yes, and when you find something that works, write that down as well.

Scott: When I’ve had these lines that I’ve used on literally every single sales call I’ve ever been on pretty much, some of the same lines over and over and over, and to me it’s like, “God, I’m saying this crap again?” But to the customer, it’s brand new because they’ve never heard it before.

Jon: Right, and remember, if you don’t get the laugh or the chuckle and you get something negative, maybe don’t use it or figure out a different way to say it because sometimes it’s not necessarily what you say but how you say it.

Jon: Good. And take the information and role play the information with people that you know will challenge you. Take the questions, the answers, what’s working, what’s not, and really commit yourself to role playing. I would suggest at least two hours a week, but I don’t think a lot of people will do that. So even if it’s 30 to 60 minutes a week, of really putting yourself in uncomfortable positions to role play.

Scott: Exactly. And one of the things – one of the main reasons I think that we need to be ourselves – is people can smell a phony. Number one, if we talk about people don’t want to be sold, but they still want to buy. They’re not really happy dealing with a salesperson, so to speak, because they’re always on pins and needles. They’re always waiting for the other shoe to drop. Then when you come off as fake or phony, they’re not going to trust you.

Jon: Right. Well said. So it takes practice being yourself. Make sure that you’re taking the time and carving it out so you can enjoy the process, because there’s nothing more unfulfilling than when you go somewhere and you can’t be yourself and you know that you’re selling in your own voice. You don’t know how to grow the relationship.

Jon: Right, it’s hard to even listen to the people that are talking to you because you’re always thinking in your mind. What would such and such say? Like you just said, you’re calling it phony, but people know when it’s not authentically your opinion. If you can give them your opinion, then they’re going to connect with you because you’re being yourself.

Scott: Yes, and remember, there’s tons of cool sales lines you can use that the guy next to you used or whatever. We’ve talked about this before. You have to make things your own and just because someone next to you said it, they might be saying it in a much different way than you would say it. There’s things that I’ve said to clients on the phone over the years that I’ve been like, “I can’t believe I got away with that, number one.” But I know if someone next to me or a brand new person tries to use that same line, they’re probably going to end up fired because they didn’t say it the right way.

Scott: Think about Tommy Boy. The whole, “Get a good look at a T-bone by sticking your head up a butcher’s *#%,” type of thing. I’ve seen people do that and crash and burn. You can’t do that.

Jon: Right. Be careful. Beware. You know, when we’re talking about … We started talking about new salespeople, but every rule that we just gave, or standard, or whatever you want to call it, applies to any salesperson, no matter how long they’ve been in the business because if you want to continually ramp up your game and not be complacent, then if you’ve been in sales 10 years, you still got to do the same steps to grow to the next level. Maybe just a little bit differently, but you still got to do it.

Scott: So, Jon, speaking of being yourself, we’ve talked about your book a little bit.

Scott: Your book is loosely based on your life. Tell us a little bit about when it comes out and where people are going to be able to find it.

Jon: Yeah, I appreciate that, Scott. The book is a business book told as a fable, and it basically talks about a person who owns a company, who’s also in sales, but he just kind of loses himself in the growth of his business and through meeting a lot of people through coincidence and a lot of people that he’s introduced to and ultimately a very wise business coach, he finds himself and can become himself again. And that his how he ultimately grows his business, his people, his company, and lives a pretty fulfilled and balanced, great life. So, it’s all kind of, the message behind the book is really you have the power within. You just got to take the time and walk the journey to find that space and find the path. Like the character in the book, Jacob, who’s named after my son, Jacob. He does that and I think it’s a pretty great read.

Scott: Wow. What a great preview and you didn’t really give any spoilers, which is good. I’ve read part of the book. I’m not going to lie and say I’ve made it all the way through so far. Sometimes I can be a little slow, but excellent.

Scott: Where are people going to be able to buy it?

Jon: Oh. Right now they can pre-order it on Amazon, Barnes & Noble, and Target.com. It’ll be available there through its release, as well as Audible.com.

Scott: We’re both authors now. I feel like we need tweed jackets and pipes.

Jon: Yeah, so I’m excited. I’m going to give it a little bit of time and then I’m going to start my second book and catch up to you, because you’re four books in.

Scott: All right, cool. Folks, thanks again for listening and we look forward to bringing more great information next week, and have a great day.

Jon: Have a great day, everybody.