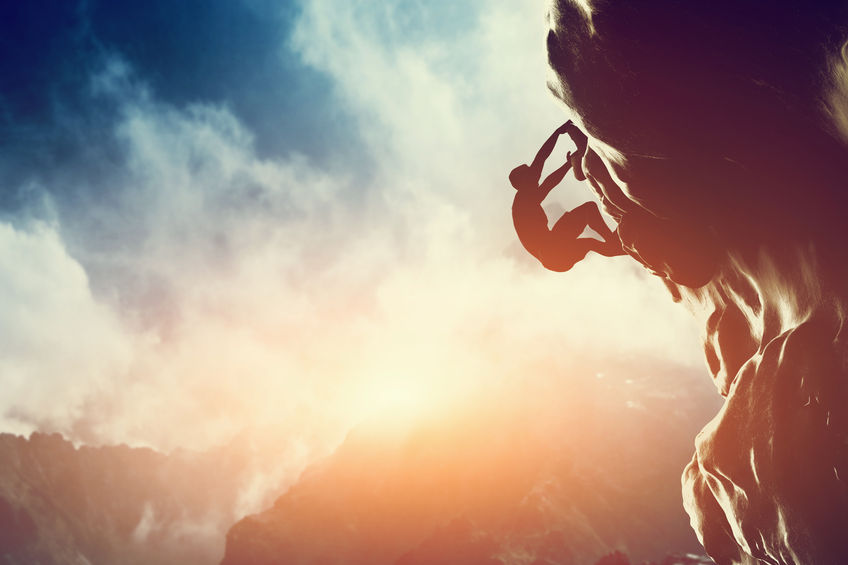 As we kick off season two of The Seven Minute Sales Minute, Scott and Jon give their recipe for avoiding complacency in the new year.

Utilize these tips to ensure your 2016 is more fruitful and fulfilling than your 2015.

Please take the time to visit out sponsor Audible.com for a free Audiobook and a free trial 30 day membership.

Scott:    Thank you for joining us for another episode of The Seven Minute Sales Minute podcast: your bite-sized and easy-to-digest guide to jump-starting your sales career and putting you on the road to gaining more prospects, more clients, more business, and ultimately, more income. Good morning, Jon.

Jon:    Scott, good morning. Good morning. Happy new year, everybody. To all of our listeners, welcome back. It’s going to be an incredible 2016.

Scott:    I think we should talk about not getting complacent to start the new year, Jon. I think that’s a good idea.

Jon:    I think we should also talk about telling our listeners what’s in store for 2016 with The Seven Minute Sales Minute. We’ve taken a week or so off to give everybody time to catch up on our episodes, and we got a lot of exciting things coming in 2016 that I think are going to really benefit our listeners. A lot of it’s based on their feedback.

Scott:    Right. Exactly. Let’s start off. We’ll talk a little bit about what we have in store. As you may have already noticed, we have a new logo, which is starting us off.

Scott:    Yeah, we’ve gotten good feedback on that, and the nice thing I like is that it makes us jump out in iTunes so we’re not fading into that white background.

Jon:    Right, which is important for branding.

Jon:    We have a new sponsor with Audible.com, which is exciting.

Scott:    I do also want to mention that we do want you to listen to Audible books in between episodes of The Seven Minute Sales Minute. We don’t want you to stop listening to us just because you’re listening to an audio book, so keep that in mind folks.

Jon:    You know, whether it’s podcasts or whether it’s Audible, your car should become a university. If you’re between meetings, you should be listening to something.

Jon:    That’s really our drive to work with Audible:  is to encourage people to make sure that they’re taking advantage of downtime.

Scott:    That makes sense. If I’m in my car or at the gym, I literally never listen to music anymore. It’s always podcasts or books on tape. I’m always trying to learn and better myself.

Scott:    The one thing that you and I have been working on, and we actually have another meeting about later today, is the Sales Academy.

Scott:    Folks, this is something we came up with. We mentioned at the end of last season that we would be taking on some clients this year. We’ve blown that up a little bit. To increase our bottom line, what we want to do is have more clients. We want to help more people, so we’re going to be taking on more than just a couple clients. We’re creating an academy. This is still kind of in the embryonic stage, so to speak. We’re putting it together, so there’s not a lot of details we can share at this point, but rest assured you will be happy. Some of you will be taking advantage of it in 2016, I guarantee.

Jon:    Absolutely, absolutely. The reason we’re sharing this with you even in its infancy stage is we hope that it inspires anybody who’s listening to this who has an idea that can begin to sprout it and do something, take some action with whatever you want to do. This is going to be, for Scott and I, not only something that we’re passionate about that we can help other people grow, but it’s also recurring revenue for us. We encourage you to try to figure out how maybe you can do something similar in your profession and whatever you do.

Scott:    Well said, Jon. If there’s anything that you want us to touch on as something you would like to work on in this academy, please let us know. You can always get with us at the sevenminutesalesminute.com, or you can email Jon or myself, as you know, at any time.

Scott:    I think first and foremost, it’s time to increase your standards. Don’t settle for what you were last year, last week, or yesterday. Always strive to be better today than you were yesterday. It’s very important. Always be better.

Jon:    Right. As sales people, if you’re looking at whatever metrics you run your business by, and we’ve gone into some past episodes on what those metrics could be, whether it’s calls, proposals, meetings, etcetera, I would recommend increasing those 10%. Increase those standards 10%, at minimum.

Scott:    Right. When you’re setting your smart goals, make sure you’re setting attainable and realistic goals, but stretch yourself. Don’t just do what you did last year. Don’t just do what you did last week or yesterday, like I said. Get out of your comfort zone. I think that’s important as well. A lot of us, like we said, we’re complacent. There’s a saying, “Get comfortable being uncomfortable.” I think that’s huge as far as anything you’re doing in life. If you’re working out, your muscles aren’t going to grow if you just do the same thing over and over again. You’re never going to grow, so always get out of your comfort zone.

Jon:    Right, and if you don’t know how to do that, then you need to reach out to a mentor, an accountability partner, and somebody at work, or somebody that you can rely on, that is going to push you and put in front of your face, “Hey, listen. Push yourself. You’re getting lazy.” Take it to the next level, and hold yourself accountable. I read a story many, many years ago – or listened to it on a book, I can’t remember – about these two people that for 35 years, these two guys, they called each other every morning and told each other what they were going to do for the day. They would report on their weight, their health fitness goals, everything. After 35 years they stopped, and they both gained weight, they both got off track. They just had nobody to hold them accountable. Find somebody that you can trust and can hold you responsible and accountable.

Scott:    Jon, I was kind of scared of where that story was going to go. I thought it was going to be, “Yeah, they talked every day for 35 years, and then they stopped and one of them dropped dead.”

Jon:    Then they died. Right. If you don’t have an accountability partner, you will die. Right. No, no, no. They did not die. At least, I don’t know, maybe part two of the story. I don’t know, but that was the part I heard.

Scott:    Jon, what’s the next step? What’s something else we want to work on?

Jon:    We talked about this in the beginning: you have to commit to learning. Make your car an online university. Listen to podcasts, listen to books on tape. You should set a measurable goal to get through ten minutes of a podcast Monday through Friday. Listen to or read one book a month at minimum. You need to do something where you’re working out your brain. We work out, we go to the gym, but we forget sometimes that our brain is also a muscle that we need to grow. Commit to learning, because if you’re not, your competitor is.

Scott:    I think something very important is our parents used to tell us when we were kids, “Turn off the boob tube.” If you’re doing something that is unproductive, think about what you could be doing to better yourself during that time as well.

Scott:    Right. They say, “Surround yourself with other like-minded individuals.” You’re the average of the five people that you spend your time with.

Scott:    Choose those people wisely, and seek out someone who is just exponentially on a path that’s higher than yours. If you are the average of the people you hang out with, they’re going to bring up that average. Also, look at someone you’re hanging out [with] who might be dragging that average down. As much as I hate to say it, if you want to grow, you may have to cut some people out a little bit.

Scott:    Jon, this reminds me of a conversation we had once while jogging. We fired a C-list friend, if you remember.

Scott:    If they do feel as if you’re bothering them and you sense that, our job is to convince them that we’re not there to bother them; we’re there to help them and change their lives.

Scott:    Exactly. One thing that we want everyone to do to start off the year is just do a quick self-evaluation. As salespeople, as humans, we’re our own harshest critics always; so, it’s important to go back and take a look at what we’ve done recently and how we can change and how we can get better. Take a look at your sales pitch, your product knowledge, the benefits of your product, how well you master those, your branding, how you close. All of those things put together will be the sum of your game, and we want to make sure that we evaluate that going into 2016, so you can plug up any holes that might be in that game.

Jon:    You know, Scott, that’s brilliant. Some of the most successful salespeople I know do that: an end-of-the-year evaluation. Not only on themselves and everybody within their team, but where every phone call led to, what every deal led to, what every proposal led to. Just the tightness of every piece of their business, which takes a lot of time. Which is why I think people don’t do it. Carve out the time to do it. If you haven’t done it for last year yet, carve out the time to do it now. You still have time.

Scott:    That makes a ton of sense. Jon, let’s wrap this up a little bit with a very special thank you for 2016. We’re starting it off right. We’re excited for season two of The Seven Minute Sales Minute, and we want to continue to grow ourselves, as well as helping you grow on a daily and weekly basis, so please continue to listen. Those reviews are always helpful, and please hit that subscribe button on iTunes, Stitcher, TuneIn Radio – wherever you’re listening. Make sure that you subscribe to us and share the love. If you like what you’re hearing, which we know you do, share it with friends, family members, coworkers, people who could get something out of this. We want to share the love.

Jon:    Right, and absolutely thank you so much. 2015 was a great year for us starting The Seven Minute Sales Minute podcast. We appreciate everybody listening. By no means are we perfect, so we appreciate all feedback, of not only what you liked but maybe what you didn’t like, so we can stop doing it. Here is to an incredible 2016 for all of you, and we appreciate you listening. We appreciate you sharing. Have an amazing year, and we’re excited to talk with you every week.

Scott:    Thank you very much, everybody. Thank you for listening to this episode of The Seven Minute Sales Minute. For show notes and worksheets pertaining to this week’s show, check us out at the sevenminutesalesminute.com. Take today’s strategies and run with them. Increase your sales and increase your income.