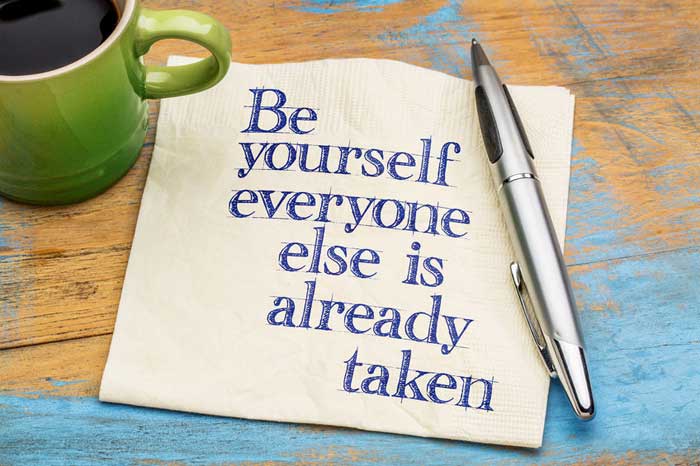 In today’s episode, Jon and Scott encourage you to stop playing an assumed role and just be yourself.  Your clients have very good BS meters. Why test them out? Be genuine and play the role you were born to play.

Sit back and enjoy!

Please visit our sponsor, Audible.com, for a free audiobook and 30-day trial membership.

Just Be You, Boo

Recorded:    Thank you for joining us for another episode of The Seven Minute Sales Minute podcast: Your bite-sized and easy-to-digest guide to jump-starting your sales career and putting you on the road to gaining more prospects, more clients, more business and, ultimately, more income.

Scott Fishman:    I’m doing great. How are you today?

Jon Dwoskin:    I’m good. I’m good. Ready to do a podcast and share some thoughts with our listeners. Thanks so much, by the way, for listening.

Scott Fishman:    Yeah, thank you very much. We’re growing by leaps and bounds and we’re very grateful for all the reviews and subscriptions that we’ve had over the last few weeks. It’s been great.

Jon Dwoskin:    Yeah, keep it coming. It’s fun to see that. Getting the reviews and the emails of people, and the comments that it’s helping people grow their business and makes them money.

Jon Dwoskin:    We’re going to give you some more money-making tips today.

Scott Fishman:    Yes. This one, I love breaking it down. I think one of the themes that we have when I bring something up, Jon, is keeping it simple.

Scott Fishman:    I think that this one is so simple. It’s just be you. Be genuine. Working with new sales people, and I train them all the time, and speak with them all the time, and I coach them all the time. Sometimes, it’s like they’re trying so hard to be like ‘The Wolf of Wall Street’, to be ‘Boiler Room’. They’re missing the mark because they’re trying to be something they’re not. One of the things, my personal brand with my clients, is I turn you into a family member. I turn you into an aunt or an uncle, or a niece or a nephew, is what I tell them all depending on their age group.

Scott Fishman:    It’s true, though, because I do care about them.  I think that’s one major thing: Letting the client know that you care about them and that you have their best interests at heart.

Scott Fishman:    If you’re genuine, they can feel it. If you’re playing that game of trying to sound like Leonardo DiCaprio, it worked in a movie, but I don’t think that works in real life. Not everyone wants to work with Ari Gold.

Jon Dwoskin:    There is a big differential there. Authenticity is, I hate saying it’s the trend because it should always be how things are, but being authentic … people expect it. Anywhere you look on the internet, especially because of YouTube, which is the second largest search engine in the country, anybody can get any piece of advice from … If you want to learn how to fix your sink, you YouTube it, and then you have an average person, who’s authentic, giving you the information.

Jon Dwoskin:    When we grew up, we barely had computers. We had word processors. If you wanted something, you went to an encyclopedia and there was a small paragraph about something. I think the world lends itself to only really wanting authentic people in it.

Jon Dwoskin:    If you can’t be you, then you need to spend … If you’re listening to this right now, and you can’t be yourself, then you’ve got to figure out how to study and prepare to be you.

Jon Dwoskin:    Right. Find your voice. It’s easy to be a parrot when you first come in to a company. Larger corporations have really good training, classes, and time that they spend with people. At first you’re a parrot, but the parrot that needs to find its own voice. The sooner you find you own voice, the sooner that you will be able to influence clients and create the roadmap that they need from you.

Jon Dwoskin:    It’s interesting, I think in a couple of the businesses that I’ve been in, prior to the one I’m doing now, especially when I was in corporate America, there is a piece of you that, I didn’t feel like I could be or say what I need to say. You’re scared because you don’t want the CEO of a company to think this. There’s only so much you can push the boundaries. What I love is, and I think a lot of people who listen to this, because you’re a sales person, you’re the CEO of your own company, you make a business out of being yourself. I feel like I’ve made a business out of being myself. The sooner you make a business out of being yourself, the sooner you stop trying to play this Leonardo role.

Scott Fishman:    Exactly, right. It’s true. I work in a company where there are thousands of people that have the same job as me. It’s crazy. There’s thousands of people, but each cubicle, each desk, is your own unique lemonade stand. You’re running your own business, so you run it how you want, and be you. It really is so important to be genuine.

Jon Dwoskin:    Again, if you go and, you and I were talking about this, saying, “It’s not what you say, it’s what you do.” When you leave a training class, or you learn something new, everybody’s out saying the same thing. I remember working with a ton of sales people and you give them a talking point. If I’m in a room of 30-40 sales people, I give a talking point, they all look to their phones. They all may say the same thing from the science of it, but the art of saying it, and how they say it, and what they do with it and where they take it, that’s all art. The ones that are the most successful, are the ones that can just be themselves and make mistakes, and not care what anybody thinks of them. They leave their ego, and their anxiety, and that bullshit at the door.

Scott Fishman:    I like it, Jon. You punctuated it.

Jon Dwoskin:    Right. The pause. The power is in the pause. By the way, that’s a good sales tip. When you want to make a point, pause for a minute.

Scott Fishman:    Are you pausing?

Scott Fishman:    There you go.

Scott Fishman:    Right. It does. Alright, go ahead.

Jon Dwoskin:    It’s true to an extent. Here’s what’s crazy. All of these things that you hear, all of the stuff that the so-call wily veterans will tell you, it all works on occasion, but every client is different. Every client is a unique and individual snowflake just like you are.

Scott Fishman:    Right. Every single situation is going to be a little bit different, so there is no golden rule about who talks first, anything like that; but, pausing, for effect, definitely works.

Jon Dwoskin:    Good pausing. Good pausing. What I think also: Whoever talks first loses; but, whoever asks the first effective, good/great question wins. Especially if you are a new sales person or a seasoned sales person, or a pioneer sales person, you want to control the meeting. You go in and you be prepared to ask really great questions that get people thinking. If you ask a really good question, people are going to know who you really are, because they are going to understand where you are ultimately going to take them, and where you want to go, because you’re going to make them think. Then, you’re going to listen to what they say, and then the follow up questions are going to show your authenticity, because you’re really listening to them. To me, that’s … If you can ask the first question, that’s key.

Scott Fishman:    So, Jon, you had an equation that you wrote down, and I’m losing it, but what was it?

Jon Dwoskin:    I did? I don’t remember. Oh! I did write an equation down. I don’t like to really call it an equation, but we were talking about …

Scott Fishman:    Jon only uses this stuff for special equations.

Jon Dwoskin:    We were talking about just being you. Being you, as a salesperson, we want to build credibility.

Jon Dwoskin:    The key to building credibility is, I think, the main differentiator between salesperson A to salesperson B. Why are you credible? There’s a lot of reasons, because you say what you’re going to do and things of that nature, which we’ll get into, but the key to build credibility, the recipe for credibility is the story that you tell, plus transparency, equals credibility. I wish I could tell you who I learned that from, and I can’t remember, but what it’s saying is, “Tell your story. Talk about the real genuine story of who you are, and what you’re selling and your company. Be transparent, put it all out there. Ask good questions. Just be yourself, and you have credibility.”

Scott Fishman:    You know what’s wonderful on this podcast? Is that you don’t remember who you heard that from, so you can’t really attribute it anybody …

Scott Fishman:    … but I can attribute it to Jon Dwoskin. I heard it from you first.

Jon Dwoskin:    Right. I wish I could, because it really is great advise, but like you, we’re always reading and listening to podcasts. There’s so much going on that I just can’t remember everything. If you’re listening to this, you’ll repeat that a thousand, a couple times, and you’ll forget that you heard it here, but pay it forward. Keep on sharing it because it’s a great formula that really grounds you and gets you in your genuine sales person.

Scott Fishman:    Right. To sum this up, I think one great exercise you can do, if we leave you with anything, is look in the mirror and listen to your own self when you’re presenting your product to a client. Are you being yourself, or are you trying to be someone else? Are you putting on a show or are you putting on the you show?

Jon Dwoskin:    Right. I thought you were going to maybe start singing Michael Jackson. You’ve done that in a past episode.

Scott Fishman:    Yes we have, Man in The Mirror.

Scott Fishman:    All right. One last thing, folks. I just wanted to say, thank you for listening. The pause worked again. Thank you very much, and as always, please listen to us every week and review us, subscribe, and check us out at audible.com as well. Thank you.

Jon Dwoskin:    Good pauses. Have a great day everybody. Thanks for listening.

Recorded:    Thank you for listening to this episode of the Seven Minute Sales Minute. For show notes and worksheet pertaining to this week’s show, check us out at TheSevenMinuteSalesMinute.com. Take today’s strategies and run with them. Increase you sales, and increase your income.